Camera as Psychosis: The Cinematography of Black Swan

As she makes her way through the backstage behind the curtain at State University of New York at Purchase, one can tell all is not right with Nina Sayers (Natalie Portman). The camera trails in front her, sycophantically, as she is replete with hypnotic beauty in black and white, still standing out from the grey walls and dark surroundings. Her body quivers powerfully and almost orgasmically. The only thing the audience needs to see is Nina’s eyes to see nothing is right, even as her arms transform, and the camera steps forwards briefly to gaze upon the face that is covered in makeup to reveal that Nina has mutated into something else entirely. But is it real? Who is really seeing this? The cinematography in Darren Aronofsky’s Black Swan plays a crucial role in understanding the film’s depiction of psychosis. Nina is one of Aronofsky’s least sane characters, but utilizing various camera tricks and a kind of meta-reflexivity, there is a subtle insanity that works behind each shot to confuse the audience as much as Nina is, while the vérité style with which it is shot allows the film’s foundation to be primarily subjective. Few films play up schlocky horror against dramatic portrayals of mental illness so well, and Black Swan is one of them.

END_OF_DOCUMENT_TOKEN_TO_BE_REPLACED

(I’ve been dying to say this again…)

Boxer turned filmmaker Alex Withrow, who also blogs and tweets and is all around an amazing guy, was kind enough to bestow upon me the Liebster Blog Award. “What is it?”, you may ask. Well, it’s this (I’m new to this as well, so):

Here are the rules for the Liebster Award:
1. Each person must post 11 things about themselves.
2. Answer the 11 questions the person giving the award has set for you.
3. Create 11 questions for the people you will be giving the award to.
4. Choose 11 people to award and send them a link to your post.
5. Go to their page and tell them.
6. No tag backs.

11 Random Things About Me

Alex Withrow’s Questions (You can see more of his stuff at andsoitbeginsfilms.com)

1. What is your favorite film of all time? Just one. Go. 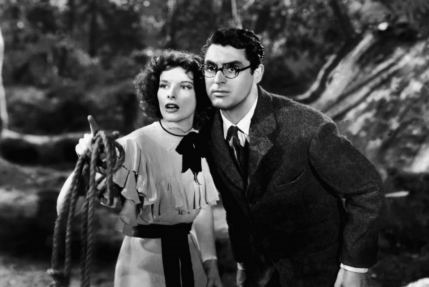 It will always, always be Howard Hawks’ screwball masterpiece Bringing Up Baby. No person of woman born can get through that film without laughing their head off, and if they can, I think they should be deported.

2. What is your favorite song of all time? Just one. Go.

Ack, that’s a hard one. I guess I would have to say George Gershwin’s “Rhapsody in Blue”, a classical piece of jazz that accidentally manages to capture the beauty of New York.

3. Who is your favorite film director of all time?

Currently, Lars von Trier. His artistic audaciousness, experimentation with technique, his ability to get incredible performances from his actresses: he is just amazing.

4. What is the best television show you have ever seen?

My friend Tyler will be able to understand this one: the short lived, but incredibly funny Fawlty Towers, with John Cleese. The jokes are cutting and the wit is fast and furious. And it’s British, so therefore it must be good, right? (Runner-Up: Ingmar Bergman’s mini-series Fanny and Alexander.)

5. Which place would you feel more at ease: the woods of Deliverance, or Maynard’s basement in Pulp Fiction?

The basement in Pulp Fiction. Because I am small and relatively agile and I could get away. If not, then, well, I’m screwed. Literally…

6. What is the best portrayal of addiction you’ve ever seen on film?

7. Do you respond to comments left on your blog? If not, why?

Yes. I don’t get many comments though! Waaah. But I appreciate all people who do comment on it.

8. Were you born a movie fan, or was there an event (or specific film) that turned you on to films?

I like to say that I was conceived in 1938 and my mother just decided to, you know, wait until 1994 to deliver me. I would say I was pretty much born a cineaste. I grew up watching Harvey and Arsenic and Old Lace. Up until I was five, I was into cars, but ever since I was five or six, it’s been films. I was the only third grader who knew what he wanted to do for a living.

9. What’s the best looking film you’ve ever seen? Specifically is it relates to cinematography.

The best looking film would be a tie between Manhattan, The Tree of Life, and The Red Shoes. I guess I should include another black and white film to be fair, so the harsh looking Pi.

OH YOU HAVE NO IDEA. I own something like 86.

11. What is your favorite Criterion movie cover?

This entry was posted in Take One and tagged Bringing Up Baby, Criterion, Fawlty Towers, howard hawks, Lars von Trier, Manhattan, Shame, The Red Shoes, The Thin Red Line, the Tree of Life.