(Author’s Note: This was original published on Fandor on February 14th, 2016, but they’ve deleted their archives.)

Is there anything more romantic than watching the face of your date as the image of Rosamund Pike slitting Neil Patrick Harris’s throat is projected up on the big screen—on your first outing, no less? Now that’s an ice breaker. My date was seated to my right as I scribbled down notes for the first fifteen minutes, unaware of the context of our meeting until a good fifteen minutes into the film. The ambiguity with which our outing was initially imbued may or may not speak to a larger idea of the cultural shifts in courting, but to watch Gone Girl on a first date is really, contrary to public perception, a romantic thing. The jittery ebullience of the evening doesn’t really change, since the context is the same, and though we didn’t go out again, not because of the film (our post screening discussion was lively and impassioned), there’s a hurdle one overcomes when watching Gone Girl—or even other works like Antichrist, Scenes from a Marriage, etc.—it’s a weird, inexplicable sense of intimacy and understanding one has when watching a film like this, let’s call them Anti-Romantic films.

Gone Girl’s heralding as the worst date movie is beside the point, as writing off Anti-Romantic films ignores what’s most interesting about them. Gone Girl’s appeal, beyond its slickness, is watching a heightened marital drama play out, two parties using their wiles and wits to their advantage and, in the process, sketching out what relationships mean to them in the larger scheme of things. The crux of Gone Girl is, for Nick (Ben Affleck) and Amy (Pike) to understand what kind of roles they play within their own relationship, and how they’ve been performing and narrativizing that relationship both to themselves and to the people around them. There’s a cognizance of how interpersonal sexual and romantic dynamics operate that’s uncompromising and refreshing in its cynicism. Why would one want to see a cynical film on a date? Because such Anti-Romances have no airs.

Gone Girl, as well as other Anti-Romances like it, are less inclined to adhere to a particular romantic narrative that posit what relationships are supposed to be like and instead examine them for how they more often than not function. Though these events may be lensed in pulpy (no, your partner probably won’t frame you for your murder), melodramatic (no, your relationship will not take the form of a six-hour Swedish miniseries), or Gothic (your partner hopefully will not take a wooden lock to your groin), there are ineffable truths about what these films depict: Nick and Amy refuse to allow one another to transgress the archetypes they’ve agreed to construct for themselves and for each other; Johan and Marianne navigate what place language and communication operates within their relationship, often at the cost of their emotions; and the anxiety and depression of a past trauma deeply affects the relationship between She (Charlotte Gainsbourg) and He (Willem Dafoe), heavily impacting how they are intimate with one another. 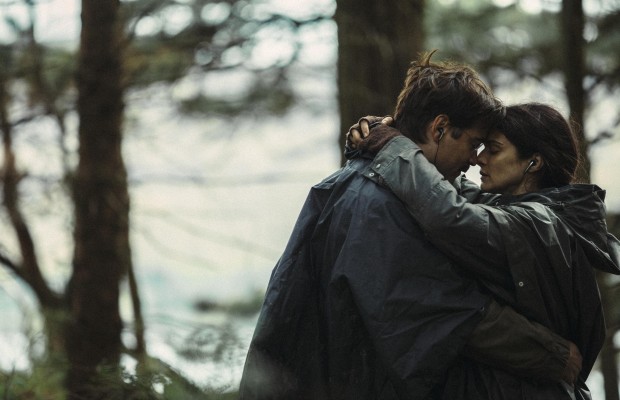 There is longing and pain in these films, perhaps notably within Yorgos Lanthimos’s The Lobster and Andrew Haigh’s 45 Years, films that seem diametrically opposed but exist in similar wavelengths. In the former, the framework of a dystopian society that declares that, should one not find a mate in forty-five days, one is to be transformed into an animal, the prickly and stinging wounds of heartbreak inform every frame. But this is amplified by having David (Colin Farrell) reconstruct his entire identity after his wife leaves him. His ability to function is thrown into flux, every action and gesture evident of the tender wound that’s been unearthed. 45 Years also has its lead recontextulize her identity, and her entire relationship, after Kate’s (Charlotte Rampling) husband (Tom Courtenay) receives a letter telling him that his long lost love has been found, frozen in time. She enacts a sadomasochistic dynamic with the past and the present, longing to know what it was that informed her whole marriage and yet terribly hurt and reticent.

But The Lobster’s bleakly comic thread allows it to approach the very absurdity of social propriety within relationships without undermining its key pathos, and Haigh’s low-key drama proves to be quietly devastating by the final keystroke of The Platters’ “Smoke Gets in Your Eyes.”

I am fascinated with this idea of something being “anti-romantic,” to explore romance and love outside of traditional or even normative frameworks as a way to get to the same kind of authentic core that aforementioned routes attempt to find. I think love is painful in a way that is more than watching Billy Crystal wander around the streets of New York on New Year’s Eve, or having Holly Hunter call Albert Brooks the Devil, or any number of choices. That’s not to say that those narratives are invalid, but they’re so often tread, so often told, that they have begun to feel stale and much harder to realize the supposed truth about love that they allegedly search for.

Anti-Romances are in themselves romantic, penetrating the same humanity and authenticity more conventional romantic films, like When Harry Met Sally, Love, Actually and The Notebook, claim to examine. Anti-Romances are as concerned with human nature, love, and identity as conventional romances, and perhaps even more concerned with its protagonists than those other films. I don’t think directors like Fincher, Lanthimos, Lars von Trier or Bergman are sadistic so much as they are masochistic: disorientation and heartbreak, whatever its forms, sear every image as if it comes directly from the directors. An honesty about compromise and pain, depression and yearning is imbued in these films, as if to suggest that these emotions are as valid as the hopeless romanticism that dominate most narratives. Nick screams, “We caused each other pain.” Amy returns coolly, “That’s marriage.” Maybe so.

I never did go out with that person again, and it’s a strange thing that I occasionally fixate on that. A rather boring rumination on “what could have been” that dissipates, probably for the better. But I inevitably drift and think about the other person that has occupied my mind for so long, and with whom I shared an adoration for Gone Girl; someone for whom the facilitation of intimacy has rendered him unable to deal with confrontation. “I bleed,” he told me, as he gave me a non-answer to the revelation that I was in love with him. I don’t know what that’s supposed to mean. The questions that Nick poses to himself, to his wife, and to the audience roll around in my head, a grenade whose grooves and bumps echo when they hit my skull: “What are you thinking? How are you feeling? What have we done to each other?”

The thing that is most striking of all is how these films recognize that love is a lie that we tell ourselves to make it to the end with another person. Or at least, love how we like to imagine it is constructed artifice, influencing how we perform with partners, how we engage in intimacy, and how we tap into our own empathy and compassion. There is no pretense of happy ending.

“I don’t know what it’s like to be in love,” he told me recently. I asked myself what that, being in love, might mean every day for seven or eight months. “Do you find me sadistic?” Bill (David Carradine) asks Beatrix Kiddo, her body on the ground, slathered in blood. “This is me at my most masochistic.” Maybe it’s been after a certain amount of conditioning—my relationship track record is Not Great—but I think love, perhaps at its core, is inherently sadomasochistic. The exchange and interplay of pain and pleasure is what keeps us intoxicated.

If our identity is inherently performance, then Anti-Romances get that love is our greatest feat of acting; a lie about a truth about a lie.

This entry was posted in romantic, Take One and tagged 45 years, andrew haigh, David Fincher, gone girl, romance, the lobster.