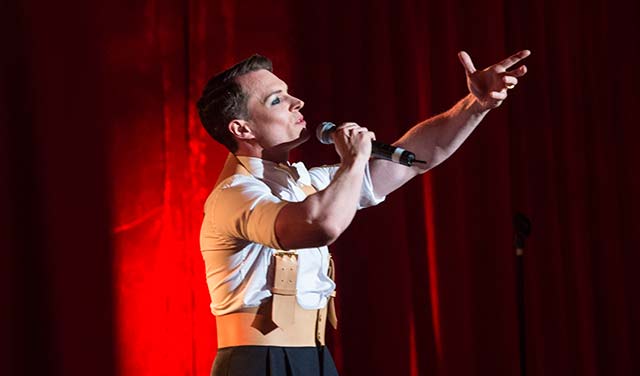 Early in Kim David Smith’s show Morphium, someone let out a “Woo!” at the end of one of his songs. He grinned – or was it a smirk? – and, hands outstretched, quipped, “10 points to Slytherin!” Such an offhand, improvised remark becomes an indicator for Smith’s on stage persona. He is, proudly I would add, not your grandmother’s cabaret performer. Rather, his sly attitude and his mix of casual and biting delivery, and his deliberately femme mannerisms can be compared rather favorably to Alan Cumming’s iteration of the Emcee in Hal Prince’s Cabaret. (Smith has spent time at the Cape Playhouse in that role in their production of the musical.) But the most curious thing about Morphium is its subversion of how cabaret theater is supposed to operate: instead of revealing everything, the heart is guarded by cutting wit.

Aesthetically, Smith has existed as a muse to several artists including Richard Haines, Samir Sobhy, etc., and on stage he is an amalgamation of the Joker, David Bowie, the Cheshire Cat, Marlene Dietrich, and Julie Andrews in Victor/Victoria. He donned a white shirt and white bowtie, but the decoration of a leather harness acts like a libidinous wink. He does not lean into his androgyny because he does not need to. The only thing missing was a cigarette. He’s sinister and there’s something he’s hiding, and what he reveals is more of a magic trick than anything resembling “authenticity”. He has in mind that it’s a performance, an act of deception posing as honesty. If cabaret is often seen as a kind of confessional, Smith cloaks that with a jacket laced with thorns.

His song selections seems to be evident of that, as well as the general arrangements. It’s an invocation of the Weimar Republic (the show’s subtitle is “A Neo-Weimar Fantasia”), where the shows were full of queers in cramped spaces, with only the one in the spotlight pouring their heart out, and their words open to the projection of the attendants. He picks deliberately melancholy songs, songs that alienate either by theme (rape in “Song of Black Max”) or flood the audience with dejection, and many a tune of yearning (“Surabaya Johnny”). His outstanding performance of a seedily arranged “You Keep Me Hanging On” is a convincing goad, as much of his set list illustrates a tale of heartbreak. But it all felt like being lied to by someone very good at playing games. And what is love, as he sings so devilishly about, if not a game?

That’s a compliment. He carefully divulges very little. He samples from the likes of Kylie Minogue and Frank Churchill/Larry Morey, a Godardian/Ronsonian jab. There’s a melding of a coldness and magnetism, and I don’t think many other audiences may have received his show in the same way, but Kim David Smith transformed the cabaret show into something more overtly Brechtian. Even the use of his seemingly immaculate body was presented with calculation, and invitation to watch someone on display regardless of whether they were to tell you the truth or not. Such a self-awareness of one’s pulchritude presents an interesting edge to the show, where “I Am a Vamp” becomes an epithet and “Illusions” exists as someone telling you the truth about how they’re going to deceive you. The duplicity is jarring, but appealing all the same. The title sounds like a portmanteau of morphine and Orpheus; apt, given the show is rather narcotic. Smith’s ironic persona, his unwillingness to be vulnerable beyond a sense of performance, is not a bug of Morphium Kabarett, but a function.