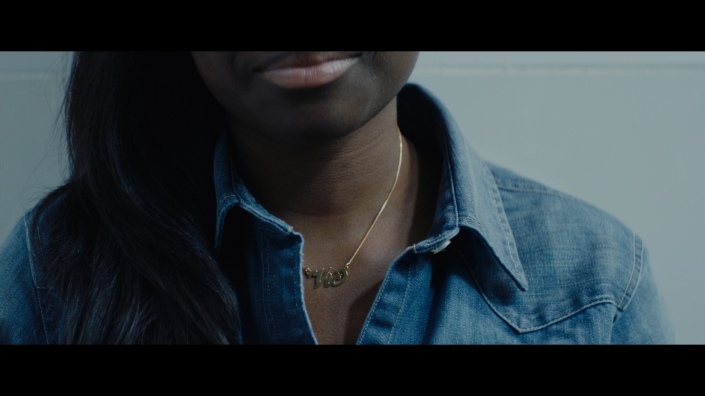 Rather than a necessarily conventional review, I’ve decided to slightly eschew that format for Céline Sciamma’s Girlhood, and instead opt for a specific scene. In this case, it’s arguably the most memorable part of the entire film, and yet encompasses much of the film’s beauty, ideas, and strengths. In a hotel, a band of black girls (as the original French title, Bande de filles, nods to), mess around with pot, eat pizza, hang around. It cuts to the room illuminated in blue, one girl looking straight into the camera, mouthing the words to the song bleeding into the air. Soon, the entire group finds itself dancing, singing, experiencing the song together. Except one. She lays on the bed, watching the proceedings, at first sequestering herself as the newbie, the uninitiated. Marieme (Karidja Touré), or as she is to be known in the gang Vic, looks in awe. And then she joins them.

It’s Rihanna’s “Diamonds” that blares in the hotel room. Interestingly, Rihanna’s sharp sound is almost ribbon-like and ethereal, seemingly recalling Shirley Bassey in certain sections, particularly her theme to the James Bond film Diamonds Are Forever. But the, for lack of a better word, magical presence of her voice is worth noting in the way that her song and her voice brings these girls together to live as one and many all in a moment. Though Sciamma’s film does technically have a linear narrative, it’s made up of moments. This one; one where they’re traipsing through a mall; one where they’re gossiping at a fast food joint; one where Vic repeats to herself “I do what I want” in the presence of the gang leader Lady.

At first, Rihanna’s single, off her 2012 album Unapologetic doesn’t sound like a call to arms or a sororal anthem, but there is an air of self-confidence about it. The words “Shine bright like a diamond” repeat themselves over the beginning of the song, demanding, playfully obstinate. Ostensibly, it’s about a romantic relationship that empowers the narrator. “I chose to be happy, you and I, we’re like diamonds in the sky,” Rihanna sings. But transposed to the world of Sciamma’s Girlhood, it’s not a romantic relationship that fuels this self-acceptance and arguably Lacanian self-actualization: friendship. And in a cinematic landscape where sororal relationships are few and far between, it’s not only refreshing, but striking to see this on display in the film. Sciamma is able to examine the complexities and nuances of female friendship, particularly within a marginalized group.

The film’s original title translates as “Band of Girls” or “Girl Gang”, but its new American title, designed as an answer to Richard Linklater’s 12 year odyssey Boyhood is more fitting than just as a piece of provocation. For Linklater’s film, and its supporters, like to prop the film up as the story of a boy told in moments, where every moment is impactful. Yet, Linklater seems to confuse the mundane with the profound, casting off closure to nothingness, and making his lead as bland as possible. Its Oscar campaign, which was something to the effect of “One family’s life; everyone’s story” felt grandiose, and worse, untrue. Much of Boyhood’s issues is in the lack of specificity, moments that exist so generically without much texture that, yes, hypothetically they could be anyone’s. Instead, an attempt at universality is undercut by self-indulgence.

But back to Sciamma’s Girlhood: its title looks like a needless provocation towards Linklater’s film, but the film itself works as an excellent reply to the very idea of its campaign slogan. For Vic’s story is not everyone’s story. And the moment that exist in the film through her eyes are not everyone’s moments, nor are they everyone else’s eyes. The camera pulls into her as she watches her new friends bounce up and down, the effects of Rihanna’s syrupy voice acting like a spell. In this moment, there’s unity. However toxic the relationships might be in this film, this particular point in time resonates with her. And through the specificity of its song, of its teal shadows (a color that finds itself permeating every frame of the film), of its elegantly dressed girls, of its wide angles, Sciamma reaches a point of universality.

Its title is also not a misnomer, for though it depicts many of the girls’ lives within the gang, specific attention is paid to Vic as she parses out the landscape around her. Sciamma’s came often follows her from location to location, observes her. It’s her story, how she learns to acquire confidence, what that means in different contexts, and how her friends influence her. It’s her story, as much as it is the rest of them. For this gang, “Diamonds” are the girls’ best friend.

Céline Sciamma’s Girlhood is now available on Blu-ray and DVD from Stand Releasing.

This piece originally appeared on the defunct site VeryAware.com