Do You Believe in “Magic”?: Magic in the Moonlight

There’s a scene that made me think that Magic in the Moonlight might be a critical self-examination of Allen’s own nihilistic ideology. At some point in Magic in the Moonlight, rather early into the film, there is a scene where George, a psychiatrist, makes an impromptu diagnosis of our protagonist Stanley (Colin Firth), noting him to be neurotic, depressive, nihilistic, etc. It’s the usual ten cents that anyone with eyes and ears can discern from a majority of male protagonists in Woody Allen films, but there was a dryness about the diagnosis this time around, or, at least when I noticed it. Comments of this kind are made about Firth’s character from nearly everyone, but the coarseness of them is sharper than normal.

Stanley, who performs as a Chinese magician under the name Wei Ling Soo, is invited by his friend Howard (Simon McBurney) to debunk a charming young mystic by the name of Sophie (Emma Stone).

His filmography divvy these two sub-archetypes up. It’s a kind of either/or thing that Allen, who can be good at nuance, tends to do with his character illustrations. They come out of a factory run by the same person and, if the presentation isn’t the same, then the gears beneath them certainly are.

The only thing that separates Stanley from a number of other male leads in the films of Woody Allen is that his skepticism is his profession. The rest of them, from Hannah and Her Sisters to Love and Death and any number of others, are misanthropic only by force of habit. But here, Allen’s stand in makes a living out of being as shamelessly egocentric and bent on crushing hopes and dreams. His job is exactly to unmask these frauds.

If Allen’s characters aren’t subject to his own brand of nihilism, they are often portrayed with a silly kind of optimism that usually rings kind of false (Midnight in Paris and even The Purple Rose of Cairo come to mind).

In that way, Magic in the Moonlight marries those two archetypes into one person. The skittish skeptic becomes the optimist under the spell of such a gamine as Sophie, who he knows in his heart of hearts is a complete fraud.

The archetype in and of itself isn’t very interesting, given that Allen has recycle it so many times, but it’s the way that the characters in the film seem to be aware of that archetype is what becomes somewhat enticing. I posited that Blue Jasmine was, to some extent, self-reflexive in its examinations of Allen’s various often one note stereotypes, and Magic in the Moonlight seems to be furthering this.

It appears that Allen has become increasingly critical of his work in his work since Deconstructing Harry, in which he puts himself on trial for the exact issues that his critics and detractors accuse him of. This seemed to be a more formal self-attack on how he used some of his narratives. Magic in the Moonlight shines something on the ideas within his films, mixing in Allen’s self-aggrandizing ego with his self-effacing anxiety in his lead. It’s an uncomfortable mix, making it so that, were you to hypothetically side with Firth, the jarring chemical experimentation wards you off. You can’t tell how seriously he’s egotistical or how seriously he’s self-deprecating. Usually the line between the two was more discernible so that the concoction was at the very least pleasant.

Stanley is an oppressive wet blanket, unwilling to believe even in the everyday magic of life. He often quotes Nietzsche. He is downtrodden, but successful. His very presence emanates disdain, and he has a spectacular ability to alienate an entire family in fifteen minutes. But he is staunchly a believer in nihilism. And Sophie waltzes into his life and sparks fly, etc. etc. The plot itself is not entirely worth noting besides in how it relates to this self-examination. Either Emma Stone’s Sophia is an avatar for everyone else or perhaps another facet of Allen’s character that he rarely likes to employ in any meaningful way besides as an object of mockery. That’s not to say Stone is this, by any means, but that her role as flighty and quirky and fun loving is often has been used in the past for such. (She’s not quite a Manic Pixie Dream Girl.) Her primary goal is to dupe Stanley into believing she’s a real medium, but subtextually the goal is to get Stanley out of his nihilistic funk and see how magical everything is. It is, initially, replete with all the falsity of most of these subplots that find themselves in Allen’s work, and yet, there is some aspect that feels somewhat sincere.

One could argue that the latter part of Allen’s career has been all about this kind of self-examination, each film focusing on a different aspect of his life. Though I have never been interested in the way that his films reflect Allen’s life, I have been interested in the way that they reflect how Allen thinks of his life. I think that’s a careful distinction to make, and it makes viewing his films as these semi-autobiographical, very subjective studies of how he feels about his life more interesting than simply accepting them as autobiography period. Thus, Cate Blanchett in Blue Jasmine seems all the more wounded, Gil Penderson in Midnight in Paris appears more wistful, and on and on.

If it’s not entirely convinced of its own goal to turn a pessimist into an optimist, or at least of that end result, it is certainly aided by Darius Khondji’s cinematography, such with summery luster. There’s a gauzy effect that makes all the summer light shimmer in every frame, and truthfully, it has a magical quality about it. In darker night clubs and in parties, the light glows, even more so than Khandji’s work in Midnight in Paris. But unlike that film, Magic in the Moonlight is not as obsessed with using the past as a way to explore the faults of nostalgia (nor of even Allen’s own penchant for doing so), but it constantly juxtaposes the warmth of the photography against the prickly philosophical dialogue.

But to what point is Magic in the Moonlight ever successful about what it has to say about Allen’s work and about his ideas? Is it even a good thing? Strictly speaking, it preaches the same kinds of ideas that has defined his 43 films. But while the film may not necessarily say something new, and maybe the verbal barbs that are essentially directed at Allen himself aren’t as sharp as I found them, the placement of the film is what matters most. His late period is defined by a kind of self-awareness that his earlier films lacked, or at least it was not characterized by the same kind of self-awareness. It’s like the last decade or so has been informed by his personal life in a different way than the first half of his career.

So much of Magic in the Moonlight is spent between this internal battle that has been externalized. The placement of this film in Allen’s work is everything in terms of is metatext, but the film on a tangential level is nothing but fine. It’s middle of the road for Allen. Magic in the Moonlight would probably be more interesting if it were as vindictive and uncompromising as Deconstructing Harry. As it is, there are too many throwaway characters and scenes which don’t make it a good enough self-examination.

Firth is fine as Stanley, oscillating between the grump we know he’s good at playing (a la Pride and Prejudice and Bridget Jones’s Diary, which are basically the same thing), and playing the Woody Allen Stand-In. It’s surprising how identifiable the latter is in Firth’s performance; many have played that archetype but a select few have made it their own and made it interesting (Owen Wilson in Midnight in Paris, Mia Farrow in The Purple Rose of Cairo, etc.). But once Firth starts stuttering, it’s clear that his performance becomes intermittently derivative, which is disappointing insofar that one would expect a little more from Firth. 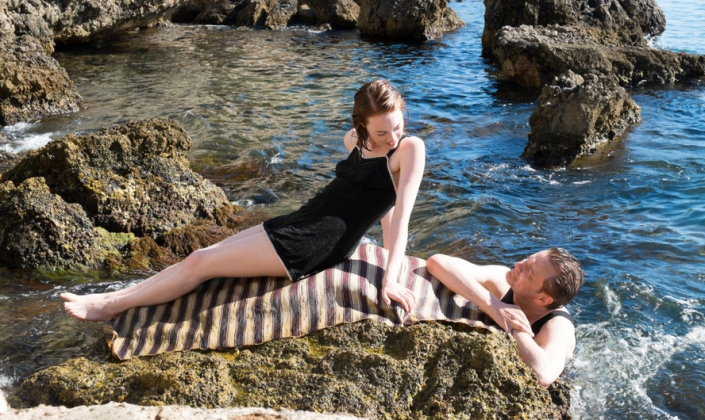 Stone actually handles her characters with an astounding about of grace and wit for one that feels slightly underwritten. She’s able to bring her sharp tongue and sardonic style from Easy A to Sophie, which makes her very pleasant to watch. (Also fun is watching her play dress up in 1920s clothing.) But Stone and Firth have little chemistry together, which actually makes sense. If one is to stretch analysis, the romance that develops between Firth and Stone is so intentionally concocted that way to show how ridiculous it is that Allen has ever had it in his films. But, it’s a stretch.

Nonetheless, though the chemistry is lacking, it’s not a barren landscape between them. By allowing Stone to have more power in this dynamic, it becomes incredibly reminiscent of screwball comedies from the ‘30s. It’s not as polished and the tête-à-tête isn’t as sharp, but it still retains that formula.

(Side note: The film has several flaws, such as its lazy expository dialogue, but having a character do Yellow face, regardless of when the film takes place, is incredibly tacky.)

So we accept that each jibe at Firth’s nihilism is one at Allen, that each attempt to turn him into a more spiritual and less skeptical figure is again one at Allen. It means that Magic in the Moonlight is more than the sum of its parts, because its parts are shabby and worn and rushed. But its whole reveals much about the engineer.