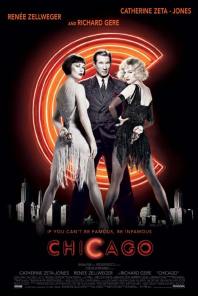 I was walking to a show in New York earlier this year and saw a very provocative poster on a wall. It had the image of a woman all in black lying promiscuously with the words “Sin Is In!” above her. It was Chicago. Chicago is definitely one of my all time favorite movie musicals (tied with Cabaret). Because of the success of this spectacle, Hollywood brought back its wonderful tradition of movie musicals so eye catching that they have become world famous. After this film was released, Hollywood brought more musicals to an apparently happy audience; films like The Phantom of the Opera and Mamma Mia! The film won six Academy Awards, including Best Picture. When Roxie Hart (Oscar nominated Renée Zellweger) yearns for the spotlight, she gets all the fame no one could want when she kills her boyfriend. When she arrives in jail, she is completely star struck by fellow murderess and vaudeville star Velma Kelly (Oscar winner Catherine Zeta-Jones). The two clash over lying and conniving lawyer Billy Flynn (Oscar nominated Richard Gere) to represent them “He’s never lost a case,” says the Cook County Jail’s Matron Momma Morton (Oscar nominated Queen Latifah). When it was first was brought to Broadway by Bob Fosse, people were not exactly pleased with its satirical look at the media. But once it gained recognition, they wanted to bring to the movie theater. Sadly, after many attempts, Fosse died. But new hope came to light in the late ’90s when choreographer Rob Marshall, who directed the Wonderful World of Disney’s remake of Annie, was asked to make it a movie. They were puzzled, however, on how to make the musical sequences make sense. Marshall gave them a great idea, “When Roxie is under stress, she sees the world as a stage.” The choreography is scrapped for Marshall’s, which is still good. A few songs are deleted (Including newspaper reporter Mary Sunshine’s (Christine Baranski) song “A Little Bit of Good”. It is kind of a shame. I bet she would have had fun with that.) And the result is amazing. It really works and the way Marshall directs helps. Making the musical sequences a little like music videos works for and against it. It is amazing to see Richard Gere sing “All I Care About” and then switch to him getting out of a very expensive car, while the lyric “I don’t care for driving Packard cars!” soon follows. The cast is splendid, in particular Zeta-Jones, who made Velma Kelly one of the coolest characters in musical history. Not to mention that Zeta-Jones was a hoofer when she was younger. Queen Latifah is sinfully delicious in her performance, especially her song “When You’re Good to Mama”. There is certainly a lot of spectacle in this film. A definite essential for musical buffs, this movie is Razzle Dazzling!

This entry was posted in adaptation, crime, drama, musical, remake.